Health anxiety and morbid thoughts; the trap of IBS. 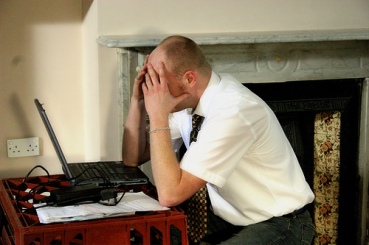 ‘What life is it if you are constantly afraid of dying?’  I asked Tom.

He had been  coming to see me for years, always with a new set of symptoms: abdominal pain, pain in his hips, his back, difficulty passing urine, palpitations, headaches,  indigestion.  His illnesses had started about twenty years ago with constipation, which he was convinced was due to bowel cancer.  After all, his grandmother had died of bowel cancer and was constipated towards the end and recently a friend had been diagnosed with bowel cancer and died.  This was around the time Tom had lost his job as a research scientist.  He was devastated.  It was the end of his life as he knew it.  His bowel difficulties proved  he was going to die of bowel cancer.  Of course he had had numerous tests, but all were  negative.   He was diagnosed with IBS but he has so little trust in the medical profession that he was sure  they were missing something.

Tom’s paralysing health anxieties did not quite fit with the risks he took in other areas of his life.  For example he loved driving his vintage Norton motor cycle fast on country roads.  I asked him about it.  ‘It’s all about control.  I am in control of my motor bike; I know what risks to take.   I have absolutely no control over my health.  That is a lottery;  I could die tomorrow.    His lack of health confidence was associated with an indecisiveness and fear of what might happen in other uncontrollable areas of his life.  He was reluctant to go on holiday; the weather was bound to be awful or the plane could crash.   If he couldn’t be in control, he could never take risks and therefore could not change and get better.  Every pain and bodily dysfunction made any attempt to recovery pointless.

It wouldn’t have helped him that his mother was always anxious about health issues,  and had been particularly assiduous with her control young Tom’s bowels.  His insecure background might have led him to be sensitive to the reversals in life.  The  loss of his job, which had become so conflated with his friend dying of cancer of the bowel that his own bowel dysfunction meant that his own life had to be  threatened.

So many people with IBS are apprehensive that their symptoms indicate some undiagnosed incurable disease that they will persist in seeking second opinions and cannot be reassured.   All too often, medical practitioners, worried about missing a serious diagnosis and the possible threat of litigation,  will collude with the frightened patient and order more investigations.  This will, however, will just serve to concentrate attention on the mystery illness and heighten both the anxiety and the symptoms.  Doctors might diagnose depression or hypochondriasis,  but these are merely labels that may not help him recover.   In the past people have extricated themselves from the morass of despair by developing a positive focus for life; for some it was religion, others travel, others a project that captured their interest and for a few lucky ones, falling in love.   Which of those are available for Tom?

5 comments on “Health anxiety and morbid thoughts; the trap of IBS.”