Bing: the art of the grudge. 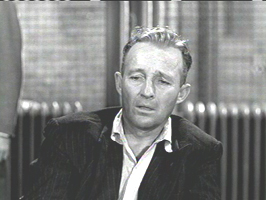 *Bing could never make a decision.  He was forever caught between what he wanted to do and what he felt he ought to do.  A rebel at heart, he desired to be different from the crowd, but could never bring himself to do so.   He feared the criticism of others, he did not wish to appear big headed and it was always more sensible to play safe.  But Bing could never get rid of the feeling that he was missing out on life.  There was a whole aspect of his life that he was just not living.

Of course, there were sensible reasons not to move house, not to go on holiday, not to learn to fly or take up the piano again.  So he didn’t do any of those, but found it hard to settle down to anything with any real sense of enthusiasm.  So caught between desire and the safety of obligation and responsibility, he secretly criticised himself for his inertia and  felt tired, his joints ached and he became constipated.  So his illnesses became the reason for not doing anything.  How could he move house, go on holiday, learn to fly if he was ill?   It was a self-fulfilling prophecy.  Whenever he tried to do anything, it made him ill and prevented it.

So he blamed the health services for not taking him seriously, the government for their incompetence; he railed against regulations and ‘health and safety’.  So it was not the fault of his existential conflict that he could not act; it was the system.  The illnesses that arose from the frustration of his self imposed entrapment became the excuses not to do what he wanted to do. His reasonable complaints were his justification, but they concealed the sense of his own inadequacy and exacerbated his symptoms.

Bing knew that his attitudes were formed much earlier in life, internalised from his anxious, conformist, risk aversive parents, who had criticised and regulated any unacceptable expression of his emerging identity.  They were was exacerbated by the reversals in life he had suffered because he could not risk exposure.  For fear of criticism and rejection, Bing had learnt to keep some aspects of his identity secret; the friends he went to football matches with never knew about his tastes in classical music;  his hill walking group did not know that he loved fashion shows.  And there were some things that nobody knew about.  Secrets can always generate tension and make us ill.  And because he could not be himself, he projected a deep sense of grudge against the forces in society that prevented that.

So how could Bing make the necessary changes?  Could he move towards what he wants to do in gradual  steps?  Could he live with the idea in his mind while doing the necessary research to discover how he might change?  Did he have to wait until his parents died or decision was imposed upon him?  Of course, there is no external reason for Bing to change.  If he could just learn to let go and accept his life without wishing it were different, then he would probably be happier and healthier.  But I think he is too analytical and frustrated to accept that yet-a-while.

This entry was posted on November 6, 2016 by nickwread in Family, Narrative and tagged greivance, grudge, secrets.