IBS and The Wandering Womb; could they both be endometriosis? 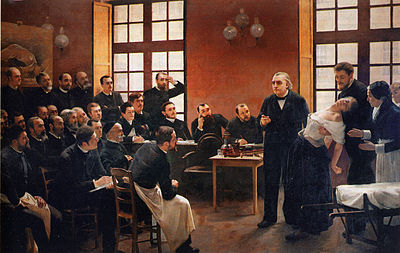 The endometrium is the lining of the womb. It is made of special cells which shed each month by bleeding. In endometriosis these cells are found in other parts of the body, though how they get there is a matter of dispute. Typically they are found in the pelvis, in the bladder or in the bowel. More rarely, they are found in the chest wall, the heart, the head. Wherever they are found they obey their essential nature and bleed. Scar tissue is formed in the body’s inner spaces and small cavities. It builds up. It presses on nerves and causes pain, sometimes at distant sites. The scar tissue forms an evil stitching which attaches one organ to another. Infertility is a distinct possibility, as the organs of the pelvis stick together. Endometriosis in the intestines makes you vomit and gives you pains in the gut. Pressure in the pelvis makes your back ache, your legs ache. You are too tired to move. The pain, which in the early stages invades you when you menstruate, begins to take over your whole month.

Along with endometriosis goes, not infrequently, a hormonal disarrangement that shows itself as a severe premenstrual syndrome. In my case it manifested itself in the prodromal aura of migraine headaches. Migraine, I had to learn, was not just a sick headache, it was a series of linked neurological phenomena of remarkable diversity. It was within the migraine aura that my words came out wrong, that the door disappeared into a black space: it was within the aura that I heard the dull hum and the muttering on the left hand side of my head. Migraine stirred the air in dull shifts and eddies, charged it with invisible presences and the echoes of strangers voices, it gave me morbid visions, like visitations, premonitions of dissolution.
‘Hilary Mantel, Giving of the Ghost – a memoir’ 2003.

As Hilary Mantel described, the symptoms of endometriosis initially occur monthly as the endometrial deposits swell and then bleed producing ‘chocolate cysts’. These not only become inflamed and form scars, which stick organs together, they can also develop their own blood supply and nerve supply. So as the condition develops, symptoms occur throughout the menstrual cycle and even after periods have ceased, causing pain on intercourse and many of the symptoms of Irritable Bowel Syndrome. Moreover connections with autonomic nerves allows symptoms to be brought on by stress and for a focus in the pelvis to influence symptoms at other sites.

Although endometriosis was first described in 1860 by Dr Karl von Rokitansky, the symptoms had been known since the birth of medicine and were probably responsible for what the ancients called hysteria (from hysteros meaning womb), which was first used to describe a variety of unexplained feminine illnesses that were thought to be associated with barrenness and absence of sexual relations. This association has survived. Even until quite recently, it was fashionable to regard endometriosis as ‘the career woman’s disease’ the implication being that if you forgo your biological imperative, you will suffer for it.

Plato (427-347 BC) provided the most graphic contemporary description of hysteria in his dialogue, Timaeus.

‘The womb is an animal which longs to generate children. When it remains barren too long after puberty, it is distressed and sorely disturbed and straying about in the body and cutting off the passages of the breath, it impedes respiration and brings the sufferer into the extremest anguish and provokes all manner of diseases besides. This disturbance continues until the womb is appeased by passion and love. Such is the nature of women and all that is female.’

For the ancients, barrenness was a social stigma and caused great anxiety. But observing that unmarried women or widows were more likely to suffer such symptoms than those who enjoyed a normal married life, the ancient physicians, all, of course, male, assumed that if a womb was deprived of its regular infusions of semen, it would shrivel and migrate around the body in search of moisture and sustenance, attaching itself to other organs in its restless journey and causing all kinds of symptoms. The notion of the wandering womb, offered a convenient explanation for the various expressions of female illness. For example, if the womb came to rest under the rib cage it caused spasms and convulsions, if it rose towards the chest, it cut off the respiration and caused shortness of breath, if it attached itself to the heart , it caused anxiety and oppression and could induce vomiting and if it fastened itself to the liver, the patient lost her voice, gritted her teeth and her complexion turned ashen. When it lodged in the loins, it could be felt as a hard ball or lump in her sides. When it rose into the neck, it caused suffocation and could be felt as ‘a lump in the throat’. When it reached the head, it caused pains around the eyes and the nose, the head felt heavy and drowsiness and lethargy set in. Observing that young women suffered more illness than old women, the physicians of the time assumed it was because their womb was more erratic.

But not all the ancient medical philosophers believed in the wandering womb. Galen of Pergamon (AD 129-199), whose anatomical insights were refined after his appointment as physician to the gladiators, was scornful of the notion that the womb could wander about the body like an animal. Instead, he came up with another womb based theory: that the retention of menstrual blood and semen could poison the body causing a variety of dramatic symptoms. This explanation endured for another 1800 years and were a popular explanation for the toxic vapours that women suffered from in 18th century Europe.

So what causes endometriosis?

How do these little clumps of endometrium deposited around the body mimic the wandering womb of the ancients?  There are several possibilities.  Many are refluxed from the uterine cavity up through the fallopian tube and into the peritoneum where they accumulate around the ovaries, become attached to the bowels and fall down into the Pouch of Douglas, where they caused painful intercourse.*  Why such reflux should occur is uncertain, though it was said to be common in girls with imperforate hymens, and it may be related to a disturbance in the motility of the fallopian tube related to lack of implantation of the products of conception.**  Alternatively, endometrial deposits may find their way into the uterine veins or lymphatic vessels and thence to more distant regions of the body. Other theories include embryonic remnants or stem cells that may develop into endometrial tissue at distant sites.

Not all women, who have endometrial deposits in the abdomen, develop symptoms of endometriosis. This suggests some variation in the immune response to the endometrium or even the products of conception.

Endometriosis occurs in 6-10% of women. Two thirds of these have diarrhoea, a third constipation and 40% abdominal pain. It is not surprising that many patients with bowel symptoms due to endometriosis are diagnosed with IBS. Diagnosis of endometriosis is easier in the initial stages when symptoms occur monthly, pain is confined to the pelvis are is associated with infertility, dysuria and pain on intercourse. It becomes increasingly difficult as scarring and connections with nerves are established. Then symptoms may be triggered by stress or even food and occur at any time of the month. The distinction between endometriosis and IBS is not helped by the lack of specific screening tests. The only screening test which is useful for endometriosis is the assay for the cancer antigen CA 125, but levels are also elevated in ovarian cancer so laparoscopy would be needed to clinch the diagnosis. It can take up to 9 years before endometriosis is diagnosed.

Endometriosis is usually treated with a combination of pain killers and steroids as gynaecologists try to treat the symptoms of pain while preserving fertility, though side effects are frequent. Progestogens, oral contraceptives, oestrogen blockers and androgenic Danazol, which can cause hirsutism and a deeper voice, can all be effective for some patients.

Patients with severe symptoms often require surgery. Fulguration can provide short term relieve, but better results are obtained with more radical surgery where the uterus and ovaries and deposits in other organs are excised. Even then, symptoms may recur.

As recently as 1995, reports found that over 50% of women with chronic pelvic pain had no organic cause, with women still often being considered mentally unstable.  Self-help groups say practitioners delay making the diagnosis, often because they don’t consider it a possibility.

The economic effects associated with endometriosis are substantial and are similar to that of other chronic diseases such as Crohn’s disease, diabetes, or rheumatoid arthritis. This economic burden is attributed mostly to maintain paid employment.

*  The eponymous pouch was named after James Douglas (1675 -1742), a Scottish Anatomist, who took an interest in such matters.

* *  After ovulation, contractions sweep down from the ovary carrying the egg down towards the uterus. These meet contractions from the uterus conveying sperm the other way. Fertilisation usually occurs in the tubal ampulla then, under the influence of progesterone, the motility in the isthmus towards the uterus is inhibited allowing the blastocyst to enter and implant in the uterine cavity. Perhaps the lack of conception and reduction in progesterone returns the tube to a state of oestrogen dominance allowing the shed endometrium to be propelled through the tube.

This entry was posted on August 12, 2017 by nickwread in diagnosis, history, menstrual cycle, Pain and tagged Endometriosis.