At last; a positive test for IBS? 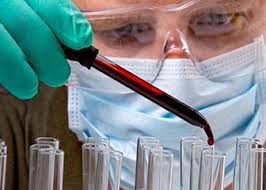 You’ve heard it all before.  IBS is a diagnosis of exclusion. If you have ongoing symptoms of bowel irritability; abdominal pain, bloating, diarrhoea or frustrated defaecation, then your doctor should  do appropriate screening tests to rule out definitive causes of the same symptoms (Crohn’s Disease, Colitis, Coeliac Disease, Bowel Cancer) before diagnosing  IBS.  The process is time consuming, uncomfortable and worrying.  You may be left worrying that you may have Crohn’s Disease or Cancer for months before the results come through and that, in itself,  can make the symptoms worse.  How wonderful it would be if there was a simple blood test for IBS, so both you and your doctor would know what to do.   Once we know what a disease is, we can do something about it.  The worse thing about feeling ill is not knowing.

Well – I don’t want to say this too loudly – we may soon have a test for IBS.   Professor Mark Pimentel – yes, it’s that man again  – has come up with a specific blood test for at least a subset of IBS.

In searching for a useful animal model for IBS, Pimentel and his team infected rats with Campylobacter jejuni, one of the most frequent causes of gastroenteritis.  When the acute infection had cleared, some rats were left with symptoms of bowel irregularity and signs of bloating and pain that resembled human IBS.  They also had evidence of small intestinal bacterial overgrowth.  Progression from gastroenteritis to this IBS like illness was predicted by a bacterial toxin called cytolethal distending toxin B (CdtB).  Rats exposed to CdtB had circulating antibodies to the toxin, altered gut bacterial populations and changes in the enteric nervous system controlling gut motility.  Anti-CdtB antibodies cross react with vinculin, a protein that is involved in cell adhesion and motility.  Other organisms that cause gastroenteritis (shigella, salmonella, etc) also generate cdtB.

The group from California therefore measured titres of antibodies to cdtB and vinculin in patients with IBS-diarrhoea and three control groups, normal volunteers, patients with coeliac disease and patients with inflammatory bowel disease.  Although all the groups showed increased titres, the average values in the IBS patients were higher than those in the other groups.

So far, so good, but in order to prove the possible clinical utility of a test for IBS,  clinical scientists need to establish cut off levels most likely to discriminate IBS from other conditions.  They then need to assess the percentage of people with IBS who have a positive test result (sensitivity), and the proportion of people without IBS, who have a negative test result (specificity).  Finally, they could calculate the Likelihood Ratio, the ratio of positive results in patients with IBS compared with patients who do not have IBS.

Mark Pimentel and his team from Los Angeles tested 2375 patients with IBS-D and compared their results with 142  patients with inflammatory bowel disease.  The sensitivity of the test was just 43%, so most people with IBS did not have a positive test result.  However, the specificity for anti-cdtB was 91%; which implies that at the cut off level, the majority of people identified had IBS rather than Crohn’s Disease or Colitis.  And at that level, the likelihood ratio was 5.2; so patients with IBS were five times as likely to have IBS than patients with Crohn’s Disease or Colitis.  Results for anti-vinculin were less sensitive and specific. The results were also less sensitive and specific when they compared IBS with coeliac disease but we already have a highly discriminative test for coeliac disease (anti- tissue transglutaminase (anti-ttg)).    The fact that anti-cdtB levels were relatively high in coeliac disease may provide a means of identifying IBS as a cause for symptoms in patients with coeliac disease controlled on a gluten free diet.  The same might apply to patients whose Crohn’s and Colitis was in remission but who still had colonic symptoms.

The data would seem to identify a subset of IBS patients, but what about borderline results?  When Faecal Calprotectin was used to identify Crohn’s and Colitis,  patients with borderline results resulted in an increase in colonoscopy rather than a reduction.  Might this occur with this test?  Also I wonder whether the antibody titres would decline the longer the time from the attack of gastroenteritis.

This test is still under investigation and is not available yet in the UK, but if anybody with IBS in the USA picks up this post, I should be interested in their experience and opinion.

3 comments on “At last; a positive test for IBS?”

This entry was posted on May 4, 2016 by nickwread in diagnosis, Uncategorized and tagged Colitis, Crohn's Disease, Diagnosis, Irritable Bowel Syndrome.